People often ask how to say the word toothpaste in Tagalog. This, along with English is one of the two official languages of the Philippines. Toothpaste is going to come up eventually since it is an item most people use daily. It will eventually come up in conversation and it is something a lot of people end up asking. The first answer that comes up is usually along the lines of “there is no exact word in Tagalog” or “just use the English word”. 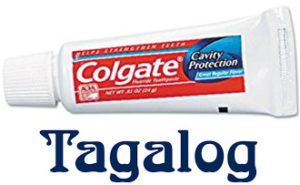 That is common enough since both languages are pretty common. We wanted to did deeper and find out if there is a more correct way to say it. We wanted to cover as many of the nuances of how people refer to toothpaste. With this knowledge you can, at the very least, end up sounding like slightly less of an outsider.

Using Google translate to convert from English to Filipino comes up with: tutpeyst. There is no entry explicitly labeled “Tagalog” as an option in Google translate. Since Filipino is the official name of the standardized form of Tagalog, this is about as close as we are going to get. I would imagine that Google translate would be a relatively authoritative source but this may or may not be the best translation for the Tagalog word for Toothpaste. I think that this is actually just either a transliteration of the English word for toothpaste or just how you would spell toothpaste with a Filipino pronunciation. I’m not sure which is the case but from what I’ve read many people seem to say that there is no Tagalog word for toothpaste and that it is just people just use the English word, often just with a Filipino accent. According to some there is no direct translation.

One colloquial term is to just call it by one of the popular brands ex: Colgate. In practice people commonly just say “colgeyt”. Again this is with an accent and can almost turn into another word all by itself. In Tagalog, you could also refer to toothpaste as “pampalinis ng ngipin” which basically means “a thing that is used to clean your teeth”.

What is the Tagalog word for toothpaste?

Another word for toothpaste in Tagalog that I have found is Pasimada. This is said to be a made up word that was created just to have a pure Tagalog word that wasn’t based on a transliteration. It is said to have been created because there isn’t an actual real equivalent in Filipino.

One might be tempted to simply translate the words tooth and paste separately and then concatenate them. That sounds like a good idea since the component words must have a local equivalent. This doesn’t actually work out because the concatenation wouldn’t sound right. It wouldn’t actually make sense when you say it. The meaning actually comes out to something along the lines of “teeth glue”. You could combine ngipin ( teeth ) and pandikit ( paste ) to form ngipin pandikit, but don’t. It isn’t what you are really trying to say.

Hopefully this gives you some insight into the Tagalog language and clears up a common question many people have when visiting the Philippines. Even locals don’t always know that there isn’t necessarily an official Tagalog word for toothpaste. It is entirely possible to go day to day just using the phrases you hear other people using and not realize that there isn’t another official word. You may assume there is but that it just isn’t commonly used. Then one day you realize that although you had never really thought about it, you don’t actually know. Now you have one less thing to wonder about.

What people on Yahoo Answers said

Another word from a Tagalog language page