Every one wants to know who which is the best. Crest and Colgate are pretty much the top two brands of toothpaste. There are other choices out there. Some of these may even be better, depending on how you measure things, but these are the two giants of the toothpaste world. They are like competing 800-pound gorillas. Each one strives to be number one but at any given time it is hard to tell who is on top. At least for now, we could call it a draw but if we really do want to pick a winner there are may different points to compare. 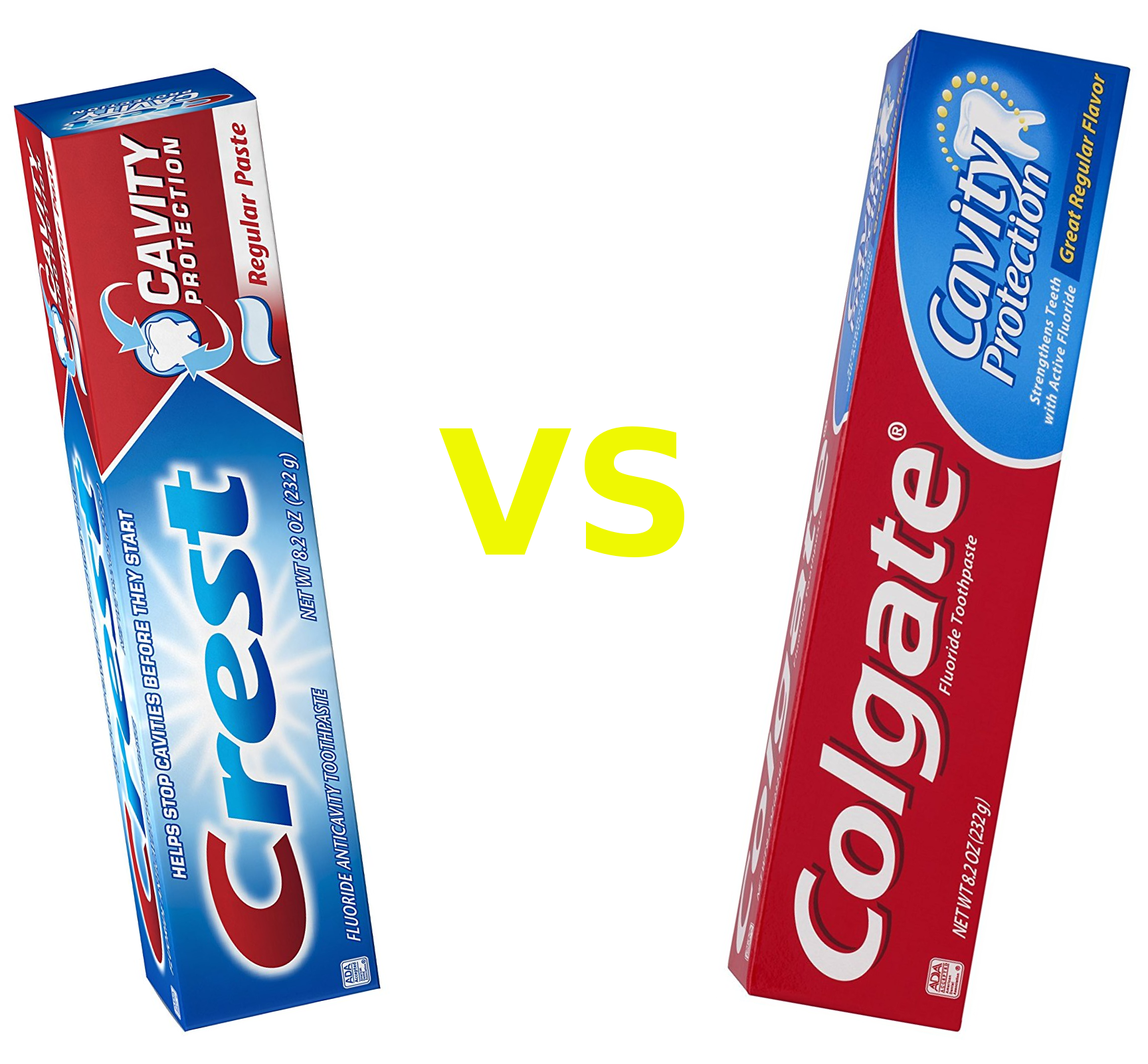 First, let’s start with a little history. Back in the the end of the 1990’s Colgate introduced a new line of toothpaste. They called this Colgate Total. This is the beginning of a new era for the company. It is still the dominant line marketed today. What was so special about this new line? It was FDA approved to treat gingivitis. This was a first and they were able to achieve this before anyone else did. Not only that but no other company ever has revived this same approval.

They were able to receive approval for gingivitis treatment because of a special secret ingredient. They had developed a new chemical themselves and patented it so that they alone would hold this secret weapon against gingivitis. This special chemical is called triclosan which they hold exclusive rights to. Triclosan turned out to be very effective and worked even better when combined with other key ingredients that cause it to bind to teeth for up to half a day.

This all sounds bad for Crest but they were not going to just stand still and fade into obscurity. They developed their own competing line of products called Pro-Health. Rather than try to find a special ingredient to replace or compete directly with triclosan, they decided to use a different type of fluoride. They decided to use stannous fluoride instead of sodium fluoride. This, they thought, would give them an advantage over Colgate and everyone else. Stannous fluoride is special because it uses tin to help bind the fluoride.

The stannous fluoride strategy doesn’t seem to have gone as well as it could have. The chemical has a couple of negative affects that make it less desirable. It can cause moderate to bad staining of the teeth. It can also cause people’s gums to slough. This means that layers of their gums may peel away. This is generally just not good. It isn’t the worst thing in the world but it can make you more sensitive and it looks terrible.

Besides trying to make their toothpaste better, Crest has also decided to go against Colgate by attacking their star chemical, triclosan. Crest is promoting their own toothpaste as “triclosan-free”. There is also a push to have triclosan studied further for use in hand washes, as it’s effectiveness has been questions there. It has still held up to scrutiny in tooth paste but is starting to be questioned when used in other products, which is good Crest. There has also been general criticism of triclosan from other sources as well. It is reported to be an endocrine disruptor and skin irritant. Many people who would prefer to go natural would disapprove of it but these same people would tend to disapprove of both companies products.

We can actually put much of this aside. The real deciding factor, much of the time, comes down to brand loyalty. If you always buy the same brand of toothpaste, that will always seem like the correct, normal brand to buy. You’re eyes will automatically pick it out from shelves that are filled with rows and rows of products that look almost identical. Why would anyone switch brands? There are hundreds of other, alternative choices and they all look the same. People generally don’t decide to switch things up unless they have a good reason. It could be sensitive teeth. It could be the desire for whiter teeth. People will need some reason to buy an different type of toothpaste and it will usually be that they are already looking for something they specifically need. Most people don’t really like to read the contents of each tube each time they go to the store on the off chance that a competing brand has introduced some special new feature that no one really understands the benefit of.

Selecting a tube of toothpaste is seen by many people as a chore. Many people automatically avoid tedious tasks that are unnecessary. The people will just walk into the store, look for anything with the word “toothpaste” printed on it and grab that. One step beyond this is just looking for any brand that they have heard of before. Usually this turns out to be either Colgate or Crest. Some people compare prices for about 5 seconds. Others spend a little more time and just grab the cheapest one on the shelf regardless of anything else. Some, who aren’t as worried about price but are more interested in quality or what they are going to get will look at other things. The most careless of these people will usually just look for whatever brand has a big flashy keyword written in red characters saying something like “Extra Cleaning Power” or “Super Minty Fresh”. If you have a choice between these and a generic tube, then why not? For people who want something that actually does something they need, they may end up searching for any tube with bright red bold letters saying something more along the lines of “Extra Whitening Included!” or “Super Cavity Protection”. They would tend to trust that the specific tube of toothpaste can actually deliver these features, at least better than another one right next to it.

Not everyone views things like this though. Some people are more discerning. They are the people who not only want certain features from their toothpaste but want to see exactly what ingredients are being included for the purpose of giving people those features. They may prefer one chemical over another for the purpose of whitening. Others, who are a little bit beyond this and maybe a little bit more ‘enlightened’ aren’t looking so much for what toothpaste does have but more for what it doesn’t. This is becoming more and more of a thing and people are becoming more and more aware of what they should really be concerned about. The major concern is that people don’t want harmful chemicals in their toothpaste. This makes a lot of sense and once you are aware of the possible threats you will tend to agree. The most common thing people look for is ‘all natural’ toothpaste. This makes a lot of sense because if you want to find something without a lot of dangerous additives, picking an all natural product is a good bet. This is also a fast and easy way to select a tube of toothpaste. The question is, do you trust these natural brands. Probably, yes, you can trust them a little bit. They are at the very least better than brands that are known to contain unnatural additives. If you really want to be sure that you are getting something safe, you will need to start reading the ingredients lists and carefully researching everything that goes into your toothpaste. One natural brand may be better than another. Also, even if you pick one of the main stream brands like Crest or Colgate, you can still make a smart decision based on the ingredients. Often times either Crest or Colgate will look bad for including things such as triclosan or different types of fluoride in their toothpaste.

Here is another video: